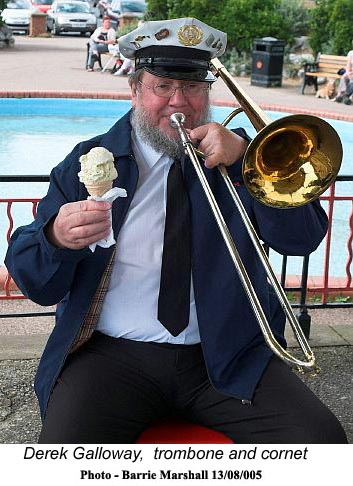 Derek started playing in 1967 with Dwight Gidney's Black Eagles N.O.Band. After two years with Ged Hone's band, he joined the Vintage Syncopators Jazz/Comedy band in 1971. From 1976 played with a variety of N.O. and parade bands. In 1978 was asked to join the Temperance Seven as their vocalist. He is still there today!

Derek continued to play trombone with many bands including The Red Rose and the late Dennis Browne's Creole Serenaders. For the last seven years he has helped to run and play with the Milneburg Boys based in mid-Cheshire. Over the last four years He has, in cooperation with Dave Copperwaite, presented visiting New Orleans musicians in Manchester They have included Barry Martyn, Chris Burke, Les Muscutt and Chris Tyle.