Whatever Happened To -
The Festival Jazzmen 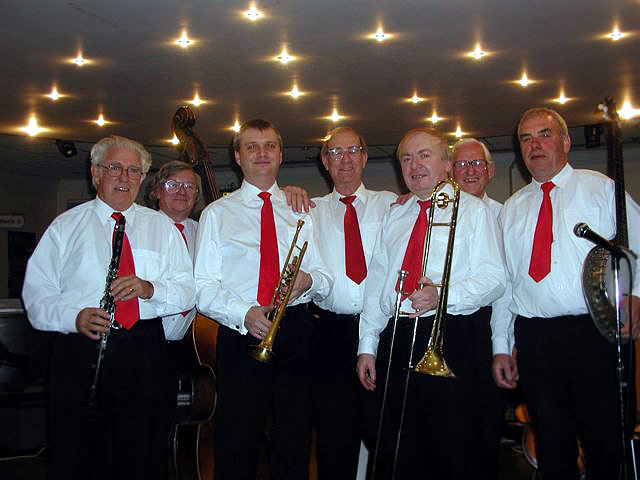 This seven piece band was originally formed in January 1974 when a group of enthusiastic jazz musicians got together and started to practise in the back room of the Queen's Hotel, Poulton Le Fylde near Blackpool. Now, more than twenty years later, this group of semi- professional musicians under the leadership of founder member Cyril Wroe are still playing on the Fylde coast when asked, although not with all the musicians shown in the picture.

With their extensive repertoire of traditional jazz and mainstream music the band comprises clarinet/tenor sax, trumpet, trombone, piano, bass, banjo/guitar and drums. To celebrate their 21st birthday the band made a live recording at Uncle Tom's cabin, Blackpool, their weekly Wednesday night venue at the time and followed this with a second recording at Blakeys Cafe Bar in 1997. The tapes were well received by Jazz F.M. Manchester who frequently broadcasted selected tracks on their Sunday programme. The band has also broadcast live on Radio Lancashire and featured in the prestigious magazine Lancashire life. 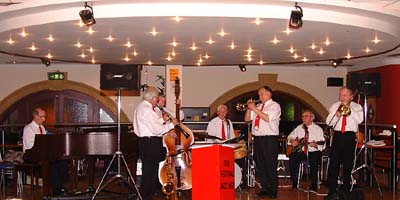 An early achievement was in reaching the semi-final of the Holstein/Jazz Journal National Jazz Band Competition, at the same time winning several awards for outstanding individual musicianship. With steadily widening popularity they have played venues further afield including, the Isle of Man; East Anglia; the LLangollen Jazz Festival; Blakeys cafe bar at Blackburn, Bolton Cricket Club, the Hesketh Arms, Southport, a selective, jazz orientated pub; Jim Bowen's Redwell Inn; the Outgate, Hawkshead; on the Lake Windermere steamer and as guests in the Mayor's parlour, Blackpool Town Hall. Some of the country's leading jazz musicians have been featured as guest soloists with the band, and these include Roy Williams, John Barnes, Digby Fairweather, Dave Shepherd, Ben Cohen, Martin Taylor, Tommy Burton, Keith and Marcia Pendlebury.

Return to Top
Return to Main Index or -