Photograph by Fred Burnett, taken on 8th Feb 2002 at the launch of "Sweeping The Blues Away" Written by Spencer Leigh

23/10/09 - Hello there Fred, Just to let yourself and your readers know that on Manx Radio's Website this morning the Following appeared, and I quote:-

The well known entertainer and longtime Isle of Man resident Clinton Ford has died at the age of 77 , following a long illness. He was born Ian George Harrison in Salford Lancashire on November 4th 1931. Clinton Ford's repertoire spanned Jazz, Country and comic songs such as "The Old Bazaar in Cairo" and " Fan Dance Fanny" In the 1960's he was a regular performer on the BBC Radio Easy Beat programme and on television in the Good Old Days.

An Isle of Man resident for the past 25 years, he also fronted summer season shows at the Gaiety Theatre in Douglas and was a regular for many years at the Isle of Man Jazz Festival. Clinton Ford leaves a wife Maggie, four children and eight grandchildren"

My husband Ken Parkinson ( of Manchester and Blackpool & Fylde Jazz Scene) knew him well and with others they became the Benny Emsley Jazz Band in Manchester.  The line up was :-

Within this band Ian headed up a skiffle group. Whilst with this band Ian left to turn professional and became Clinton Ford. This was all in the 1950's. - Ken & Kath Parkinson, Isle of Man

Hi Fred, I have just read the news about Clinton Ford. So sad. He was a great performer. I recently bought a CD of his. As many people won't be able to pay their respects due to the long distance, how about someone organising a memorial concert in Manchester/Salford with donations to the Guide Dogs. Perhaps Salford City Council could be involved.

Clinton Ford 's funeral service and cremation took place this afternoon at the Crematorium Chapel here in Douglas. Isle of Man. It was to a "packed house". The service was a celebration of his life and was quite beautiful and informal. Three daughters all gave their thoughts and family memories of their life with their father and tributes to Clinton from Bill Bebb the BBC producer and Brian Matthew who had been best man at Clint and Maggie's wedding many years ago and involved with the Easybeat programme with Clint. Because they could not attend in person their Tributes were read out by Mr David Callister a Member of the Isle of Man Parliament. It was a truly memorable service and an honour to attend. 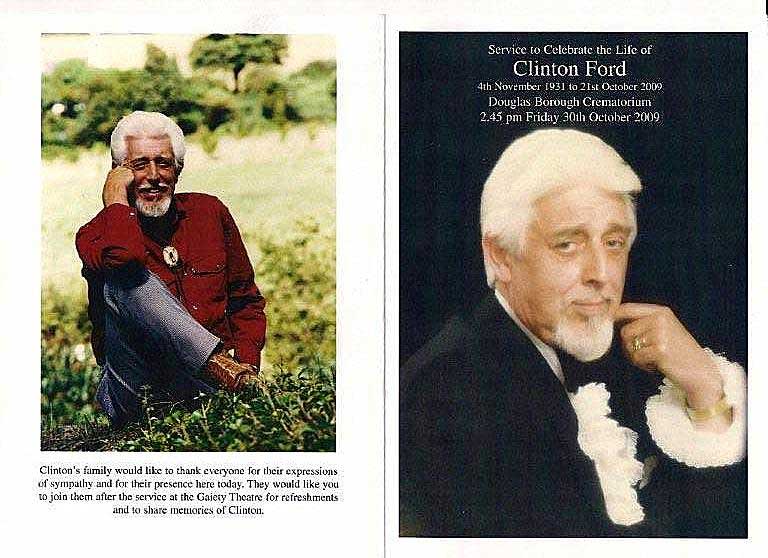