I played with a small band in the late 1940's and the pianist was a very accomplished player by the name of Alan Hare. A few years later I was surprised to see him playing trombone with either the Saints or Merseysippi Jazz Bands. Does anyone know where he went from there?

Also does anyone remember a character by the name of Ted Calvert who used to frequent the Jazz Clubs in the Manchester area. He resembled a Mafia type, with his sleeked down black hair and thin moustache, and it was rumoured he always carried a Luger pistol ! Happy days....

Thanks for a really interesting web site Fred,

Alan Hare lives in Didsbury. Ted Calvert died many years ago after being attack by a yob in Macclesfield - I was there.

Probably Harold Edwards is by now up to his ears in reminiscences of Alan Hare. There was the Gordon Robinson Septet, for which Alan wrote fabulous arrangements and played piano which was voted Europe's top 'mainstream' jazz group by a panel of m'learned judges in the early '60's. Next came the Alan Hare Big Band, firstly at the MSG then the Midland Hotel in West Didsbury. I believe Alan still plays on occasion with the Red River Jazz Band and he is certainly one of the great authorities on Duke Ellington's music.

TED CALVERT. Singer and ukelele player. Lived in Brinnington. Occupation: Window dresser. He was a real character and he could sing.   I remember he recorded with Pete 's Collegians - originally the Crescent Jazz Band.  Ted did a super version of "Are You From Dixie" I don't have a copy but remember it well. He sang with most of the Manchester bands on a "sit in basis" But did sing full time with Pete Haslams Collegians recorded "Are You From Dixie" and I remember it was an excellent recording. He was a "snappy" dresser with pencilled moustache and wore a cloak. As I mentioned in my last message he was attacked by a yob in Macclesfield and was hit so hard he ended up in hostital and as a result died some week 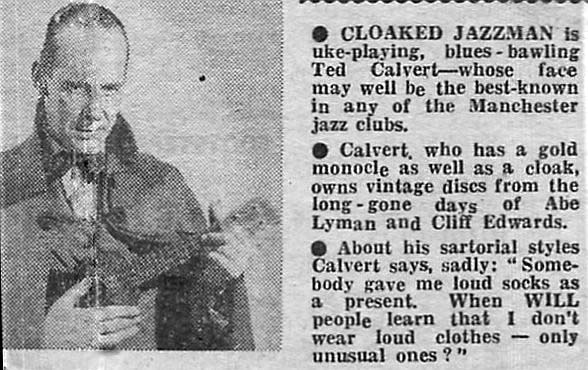 s later. Janet and I remember sitting on the top deck of a bus travelling from The Railway in Wilmslow to Bramhall and Ted sang and played his ukelele all the way. Ted, Bill Brennan, Bill Entwistle and Eric Batty were all there with myself when the idea of the Mart Rodger Jazz Aces was muted - it was in a cafe in Albert Square.

Janet, my wife, has kept memorobilia files from the year "dot" and as luck would have it we have a picture and newspaper article from the Jack Florin column of the Manchester Evening News (see left). Anyone interested I can scan it and send a copy. Incidently Jack Florin was Harry Giltrap and Alan Stevens. Harry became a Director of Hereward Radio in the south Midlands and he happened to run a jazz programme on that station. Alan Stevens also presented an excellent Jazz programme on GMR Radio - then called Radio Manchester with John Featherstone. Alan Stevens played tuba with the Smokey City Stompers - I have a 12" 78 on the Addison Label (Hime and Addison - record shop on John Dalton Street). John Featherstone played piano with The Southside Jazzmen, The Jazz Aces, George Jackson Jazzmen and Mike Martin Hot 7 also called (Mike Pembrokes Hot 7, Big Petes Lecherous 7, The Alley Orchestra) - we changed the name frequently for tax reasons! Sadly Ted, Jack, Harry & John are no longer with us but I'm sure they are all comparing notes on some of the fabulous musicians at the Jazz Club In The Sky.

I hope this is interesting.
Cheers Mart Rodger

The band was formed c. 1946, underwent about three major personnel
changes over approximately 6 years, and sort of faded away about 1952-3. 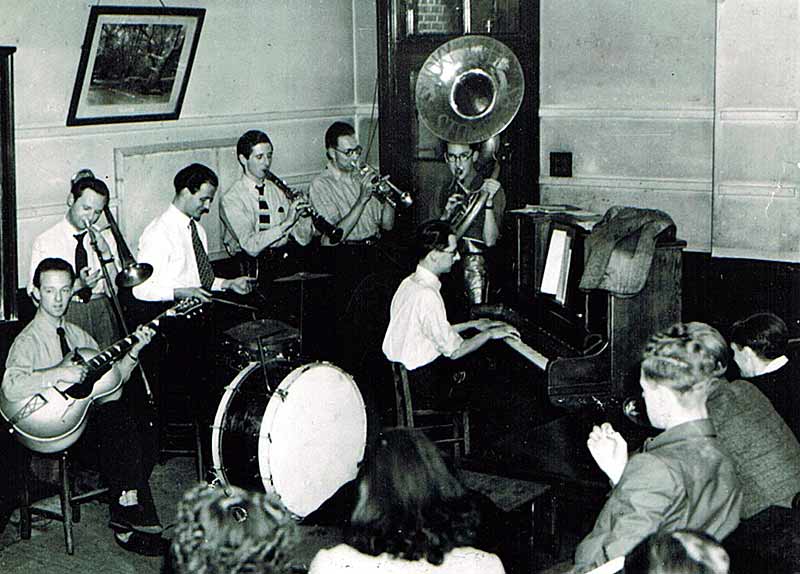 The musicians visible in the photograph below are L-R: Harry Giltrap - barely visible (banjo), Eric Abrams (guitar), Eric Lister (clarinet/vocals), Dave Browning (trumpet), Alan Stevens (Sousaphone - but just standing, not playing), Derek Poole (trombone). The others aren't visible, but the photo was taken in July 1948 at a big and important concert at the Onward Hall, Deansgate," 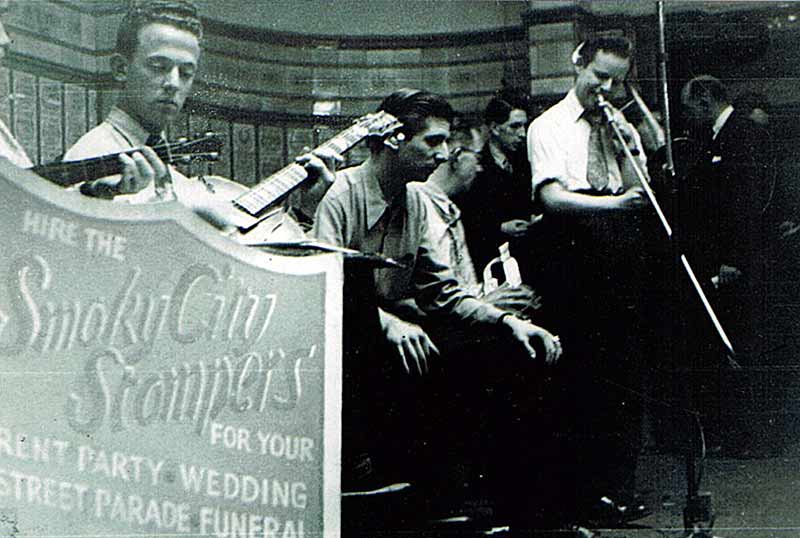 Fred,  I have just been scanning the internet for memories of the Smoky City Stompers and am amazed at the amount of information there is on file.

I did a stint on banjo for a while and enjoyed a wonderful time with some great guys who became quite famous in their own right on the Manchester jazz scene - Harry Giltrap, Alan Stevens, Derek Atkins, Tony Bagot, Ken Wray and many more. Alan Hare, it would appear, became something special !!!

I have been living in Northampton for the last 30 odd years but did meet up with Tony Bagot a couple of years ago playing bass with Alan Elsdon. Apparently, his teeth failed him !

John Westwood has turned up a 78 - a recording which Bill Curtis did in 1948 at the Sheffield British Restaurant, which was the home of the then Sheffield Rhythm Club.  It's of Manchester's Smokey City Stompers, let by Freddie Fiddler, trombone, and John was guesting on drums. John writes, "I don't have the rest of the personnel. I happened to be on it because I was stationed with the RAF at Padgate at that time, and was in the habit of drifting over to Sheffield on Friday nights - often to dep. or get a 'sit in' with Bob Barclay's Y J B, Ray Foxley's Levee Ramblers, and the like. I have some recordings of these, too. I've never been able to find out what happened to Bill Curtis (or the masters of the 'masterpieces' he recorded). Perhaps some of your friends and readers might know something?".

I have some information