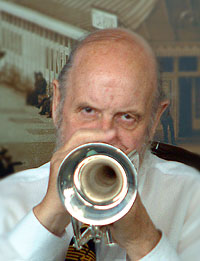 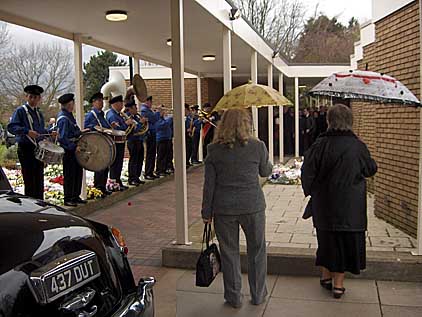 What can be termed The Hugh Gerrard Memorial Marching Band, a 10 piece band of musicians who'd played with Hugh probably on similar occasions saw him into The Blacon crematorium, Chester. I guess there were two to three hundred relatives, friends and fellow musicians there from far and wide; in particular I feel Yorkshire deserves a mention. After a befitting service, the band struck up in bouyant mood and brought the formal proceedings to a close. Hughie's presence abounded. And with that we all descended on The Amada Hotel and celebrated Hughie in the way musician's in particular do. No doubt he's already played a couple of gigs in his new surrounds, 'cos he didn't let the grass grow under his feet! - Malcolm Hogarth

"I was devastated when I heard that Hughie had died. I didn't know him all that well, but he was always an interesting character to talk to and it was obvious that his heart and soul were in the music. And 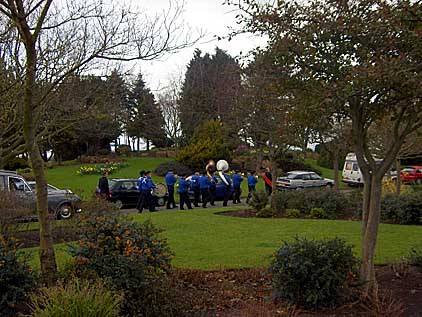 he was the lead man at both my favourite local watering holes; the Ship in Hoylake and The Old Colonial in Birkenhead. I've lost the devil only knows how many friends, relatives, acquaintances and iconic figures over the past few years, but you don't lose somebody like Hughie lightly." - Fred McCormick

"I only recently played with Hugh Gerrard with the Savoy at Widnes RUFC. He was a a "trooper" and always willing to stand in as a dep at very short notice. Please pass on my condolences to all his family." - Jon Penn

"We are all devastated at the news about Hughie. He seemed to be immortal and we will all miss him terribly. Not only the musicians he played with - and they were many - but also those hundreds who sat in front every week at the many, many venues he graced with his presence. Hughie's knowledge of - and love for - the music was unsurpassed by anyone and his own personal style of playing was always based closely on his New Orleans idols. His many, many friends and admirers both here and overseas will remember him for a long, long time." -  Tony J Davis.

"We're all going to miss him, his wide repertoire, and his original phrases". - Malcolm Hogarth and Isabel Toner".

"I was particularly sad to receive this news as I met Hugh a few times and he was always an interesting person to chat to. He told me that the music was something that kept him going" - Fred Burnett.

Hughie's funeral was a very moving occasion and the marching band was the best I ever heard, as it was evident that all the musicians were each making their own very personal tribute to him.

I feel tremendously lucky to have been able to play with Hughie on a weekly basis for nearly 7 years. It would be tempting to wax lyrical with musical jargon, but it is more meaningful to say that playing with Hughie was simply pure joy." - Phil Yates

Hughie was a good friend of mine. He lived only about half a mile away from me. I saw him about a week or so before his death which came as a great shock as he seemed in good health on the whole, no history of heart problems, although he did have others, like his dodgy hips etc. Sadly I wasn't able to get to his funeral which I understand was well attended. I played with the Savoy on Tuesday without a trumpet player in deference to him, just Brian Legan and me on the front line.  - Peter Fryer

A fond memory of Hugh Gerrard. I was playing with the Savoy Jazz Band at Widnes RUFC a few months ago and really enjoying it when Hugh suggested playing Jazz Me Blues. Bart Pool was on Trombone that evening along with Hugh and myself in the front line. Pete Swensson (bass) Reg Akeyard (banjo) and Brian Woods (drums) completed the line-up. At Hugh's suggestion we played Jazz Me Blues. As everyone knows this has a cowbell ending with tag which Bart and I played but not Hugh. After the applause finished Hugh announced to the band, " none of that b-------y Dixieland rubbish here and he meant it. A New Orleans man to the end. Rest in piece Hugh - Bernard Bibby.

So sorry that I couldn't attend Hugh's funeral: the day job got in the way again. Hugh was really nice chap and his talents will be sorely missed. My condolences to all his family. - Jon Critchley

Thank you for organising the Memorial Page to Hugh. It is reassuring to know that he played a significant part in other's lives, and that people have such fond memories of him,

Through your website I'd like to thank all those who came to Hugh's funeral for their wonderful support and for all the letters and cards (over 130) which I will treasure always. I managed to get through the funeral day, thanks to all those being there to help, but now Hugh's empty chair, and poor lonely little cornet case are harder to face! At least he is out of pain now, and life must go on!

Thank you again for everything.

Musicians Who Are Known to Have Attended Hugh Gerrard's Funeral. Blacon Crematorium, Chester. 22 March 2005.
Information provided by Fred McCormick from a list supplied by Terry Birkenhead

The Marching Band was Composed of the Following 12 Musicians;

The Other Musicians Who Paid Their Respects Included;