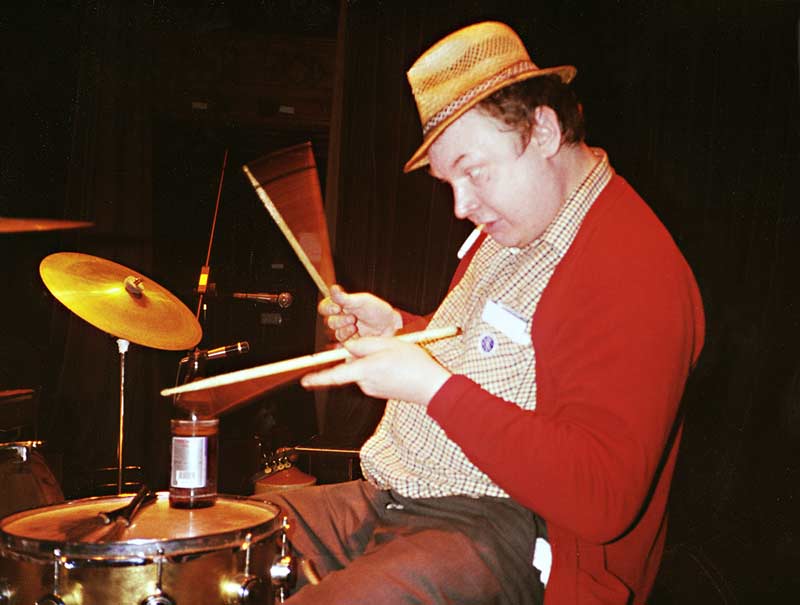 Hello there, Fred. I'm sorry that my first email to you for quite some time is to report the death of gifted and eccentric percussionist Ian Howarth in the early hours of Dec 30. He'd been - almost secretly, it appears - undergoing chemotherapy for cancer and was rushed to hospital from his London home when he was found in a bad state by his cleaner the previous day.

Many here will remember Ian, who was sixty, as key founder of Wigan-based The Vintage Syncopators. He led The Temperance Seven for many years, was drummer with the Alan Cooper trio until Coop's death a couple of years ago, and - in spite of chronic illness after his parents and sister were killed in the tragic Tenerife plane crash thirty years ago - was always at the forefront of his art, playing with many of Britain's jazz favourites.

Even though his stage presence was often hugely comic and he could hold a huge audience spellbound with his tall stories and seemingly unflappable Lancashire cool, Ian was a jazz purist and friend of Max Roach and other kings of the art, and an extremely shy man off stage, often slipping off through a back door to a lonely corner in a nearby pub rather than face the greetings and praise of strangers.

Regularly featured on your site are some of his oldest friends and playmates, including Willie Entwistle, Johnny Tucker and Derek Galloway (of Cafe Society and The Temps).

Sadly, Ian - who I first came to know when we played together as neighbour kids in Hindley when we were both around six or seven - had become very much the loner in recent years and funeral arrangements, if any, are uncertain. I'm sure you'll be updated by other members here, if not by me (I'm a long way away in the South of France) as soon as anything is known.

Ian never married and is survived by his two remaining younger sisters, Lindsay and Gillian.

I'm sure he'd like to leave us with the smile he was so uncannily capable of raising on stage with some of his wilder cabaret acts; so here's a clip from the Wheeltappers and Shunters Social Club TV show in 1975 with similarly young Willie Entwistle, (sax), Derek Galloway (trombone and vocals), Johnny Tucker (cornet and Zippo), the late Charlie Smart (banjo) and Vince Turner
(cockeyed tuba):

It wasn't until last week I learnt of the death of my old friend Ian Howarth via Neil Marr's brief obit in Just Jazz magazine and then, via Google, the fuller version on your website.

I knew Ian only briefly circa 1985/86 when he joined Bob Kerr's Whoopee Band for whom I was roadie/soundie 1984/88. He was certainly a character and we kept in contact ~ on 'n' off ~ over the years often by lengthy early hours phone calls or by letter. Decyphering his handwriting was, sometimes, a challenge that even Bletchey Park's Enigma machine would have struggled with <G.

Regarding the Vintage Syncopators video clip on YouTube, Ian 'negotiated' long and hard with Granada TV for a copy of this and finally won out, but at a price. They charged him £120 !! Talk about rip off - it wasn't even on pro-grade VHS tape.

13/03/09 - This item appeared in the Musicians Union Magazine

Ian Howarth passed away in London on 30 December, aged 60, following a ten-month battle with lung cancer.

Born in Hindley near Wigan, Howarth began playing music at secondary school, taking up the trombone before turning his attention to the drums during 1964, and co-founding Lancashire legends The Village Syncopators the following year.

He joined trad hitmakers The Temperance Seven in 1966, effectively Leading the hugely popular band until 1985, and his humorous onstage antics held audiences spellbound, whether at gigs or during appearances on such top rated TV shows as The Wheeltappers And Shunters' Social Club.

For many years, until the death of its leader, Howarth was the drummer for The Alan Cooper Trio and also played with the likes of The London Jazz Allstars, Hot Six and The Night Owls.

Although remembered as an entertaining onstage character, Howarth is thought of by his family and friends as an extremely shy man who dedicated his life to music.

You may have heard of the death of our brilliant drumming friend who died on Tuesday 30th December 2008. Ian had been coping with lung cancer since February 2008: he maintained a full schedule virtually to the day before his demise and was playing well until the end of November, his last gig being with The Legacy Jazz Band at The Lord Napier, Thornton Heath.

Ian's funeral will take place on Thursday 22nd January, 3.20 pm at Putney Vale Crematorium. It is hoped that a parade band will lead the cortege up to the crematorium chapel so arrive at 3 pm for this. Musicians wishing to be part of this, and the event below, should contact Max Emmons on 020 8715 6665 or via email to valmax.emmons@blueyonder.co.uk

Earlier the same day, at 1.30pm, a band will assemble outside Ian's flat at Macarthur House, Streatham, and play for half an hour for Ian's neighbours and local friends who may not be able to attend at Putney Vale. Macarthur House is the first block on the left of Forster Road, off the Atkins Road section of the South Circular, about ¼ mile down from the main Streatham Hill/Brixton Hill road.

There will be a gathering after the funeral at The Lord Napier, Beulah Road (corner of Bensham Road), Thornton Heath where musicians will express their respects in the normal way. A buffet will be available.

Should you wish to send flowers, these should arrive at the undertaker's chapel before 1.20 pm at Donald S Drewitt, 49/51 Upper Green East, MITCHAM CR4 2PF. Please indicate for Ian Howarth.

23/01/09 - I attach a photo of the parade band at Ian Haworth's funeral. There are other pics in the pipeline for those interested. The chapel was packed with some standing at the Putney Vale Crematorium on Wednesday 21st Jan. Former and current temperance seven members attended as well as Mike Higham from the Vintage Syncopators who also paid a fine tribute as part of the service. Max Emmons (trumpet ) did sterling work organising all aspects of the day - Ken Aimes 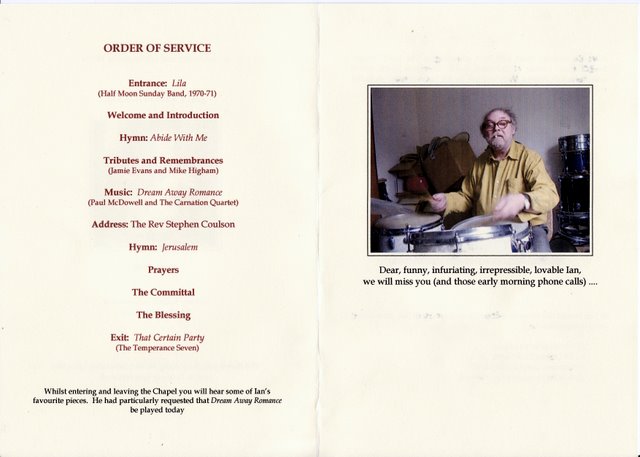 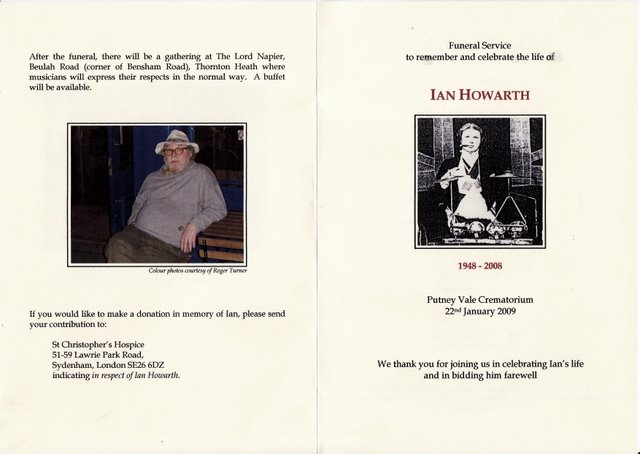 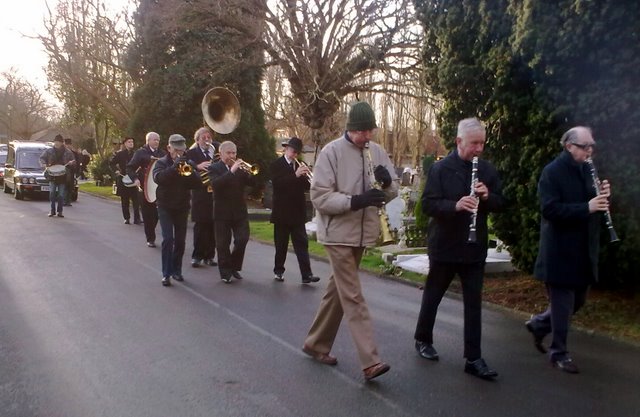