Memories of an unforgettable character

05/07/07 - Jazz singer and author George Melly has died at his London home. He was 80. Melly had been suffering from lung cancer but he refused all treatment and carried on delighting his fans on stage. He also developed dementia. He was born in Liverpool in 1926 and for 60 years has been an acclaimed, popular and much-loved performer. George was diagnosed with lung cancer in 2005 for which he refused all treatment and continued singing until near the end. "In 2004, George developed vascular dementia and his last performance on June the 10th this year was at the 100 Club in aid of Admiral Nurses, part of the charity For Dementia." (News item - FB) 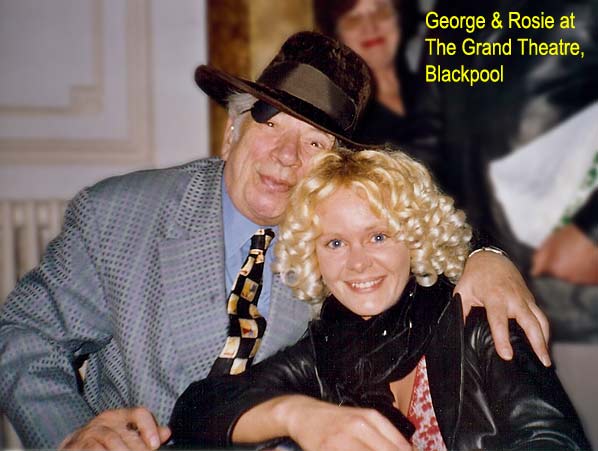 I heard on ten o clock news and I rang my Mum straight away. Spookily she was ringing me to tell me at the same time. Its really sad, I met him twice and he was so pleasant, I always meant to write to him and tell him how much he inspired me but I never did. My Mum and Dad used to go and see him everywhere when I was little and I have all his LP's that he signed for them and latterly CD's that he signed for me

George was an inspiration to all young Jazz singers back in the Forties, Fifties and Sixties, especially those of us who shared his total devotion to Bessie Smith! Anybody who went to one of his "heyday" concerts will remember him hurtling himself - heedless of safety - from the stage as the culmination of Johnny - of "Frankie & Johnny"- meeting with his ultimate fate. Later, on one of our RADIO! programmes, he enacted the whole saga, using a couple of beer glasses to achieve, as Frankie, a feminine anatomy. I also remember him stunning a rock and roll pub audience in Liverpool with the same song. Invited to join the bemused band by an equally bemused pub landlord, George just said to the guitarist: "Play a twelve bar blues until I stop you" - and they did.... Then I remember walking down the corridor of a certain London recording studio and hearing this beautiful rendition of a standard ballad. "Who on earth can that be?" I said to our recording manager, Terry Brown. Back comes the shattering reply - "It's George. He wanted to do something different on his new album". Well, he certainly could - and did do "something different" as indeed he did for most of his life. Fittingly, he did most of his later concerts sitting on a throne! Long live the memories of Emperor George!

I vividly remember doing a gig with George at Hammersmith town Hall about 1964. Of course he did his party piece ' Frankie & Johnny '.When he got to ' and the third time she shot him he fell ' he vanished over the edge of the stage ! I just gaped with astonishment since the stage must have been about five feet high ! George unperturbed clambered back up never losing a beat. I remember with pleasure the Jazz Unlimited concerts on Sun. nights at the old Ardwick Hippodrome in the '50s when George sang with the Mick Mulligan Band. Generally dressed in black he was our role model. We won't see his like again. Moe Green.

Fred, I was saddened today to hear George had taken his final encore. He and Mick (Mulligan) were an integral part of my growing up and my memories of their various escapades could not be repeated here. Together they were opposites yet co-dependant. One would never bathe and insisted the other was washing away essential oils from the skin.. Guess who? Their wit and good humored bawdiness is the stuff of legends and the world is a poorer place for the loss of them both.

His penchant for surrealism and his own brand of anarchy meant that George Melly had no time for religion. But he was not above recognising the opposition when it was on form. Faced with a uniquely beautiful sunset in the Scottish highlands he had the Mick Mulligan band coach pull to the side of the road and organised the musicians in a round of applause for God.

There were many misconceptions about George. He was regarded as being a hard-bitten man who was a wonderful blues singer. In fact he could barely be described as a singer at all and he was so soft and gentle in his relationships that he was easily and often reduced to tears.

What he was was a consummate actor, writer and comedian and one of the country’s most gifted and erudite commentators on the art of the 20th century. Certainly he was most renowned for his blues singing, but he didn’t have a particularly good voice and the Gothic and graphic nature of his dramatic performances of songs like “Send Me To The Electric Chair” and “Empty Bed Blues” obscured the narrow bounds of his musical talent. His brilliance for melodrama was exemplified by his regular performance of “Frankie and Johnny” where, in a remarkable display, back to the audiences and hands along his spine, he created an incredible tableau of a couple making love. The lyric involved Johnny doing Frankie wrong. Intoned by George it became “I think he was contemplating doing you a serious injury.” The number stayed in the Melly repertoire for more than 40 years and was only finally abandoned when George became too portly and prone to damage to throw himself violently to the floor as he had done each night at the climax of the number.

It was George as much as D H Lawrence and “Lady Chatterley’s Lover” who forced the acceptance of free thinking about sex in this country and when the Rolling Stones and other rock groups appeared on the scene with intent to shock, George had covered the ground twenty years before. He and his satyr-like bandleader Mick Mulligan were replete with the conquests of the many groupies who had placed themselves before them.

His first autobiography, Owning Up (1965), was the most hilarious book ever written about jazz. The writing style is so good and the anecdotes so pungent that it has dated not at all.

Of it Mick Mulligan said caustically “George owned up about everybody but himself.”

George Melly needed an audience. He didn’t care whether he sang or spoke or simply stood before a crowd as long as there was one there and it was devoting all its attention to him. The audience was his great addiction, as was apparent in his final months when he went on inexorably and beyond sense with his public appearances, ignoring a sequence of illnesses that would have pole-axed anyone less driven.

Understandably, since he had had far more than his share of it, George was philosophical in old age about the decline of his lust.

“Impotence in old age is no great loss. It’s like being unchained from a lunatic.”

Hi Fred, the first time I saw George Melly was sometime round about 1955-6 at the ballroom at the Spanish City in Whitley Bay. At the time I didn't know there was a difference between trad and be-bop but I was totally impressed by the the hokum of the Mick Mulligan band. What really stands out in my memory is not the music but the fact that when the lights went up on the second set in an alcove at either side of the stage were standing George and Mick and the band of course played "The Saints"