The Eighth Voyage of Pete and Co!

The trip to New Orleans in October 2004 bore many similarities to previous ventures; a good time was had by all. My good friends Roy Freeman and Gerry Owen accompanied me, Roy having made several trips in recent years but for Gerry it was 30 years since his previous visit.

What distinguished this visit from others was the trip we made to New Iberia. Whilst hiring a car is probably the most efficient mode of travel, as none of us fancied the driving, we opted for “riding the dog”, a trip on the Greyhound bus. Enquiries at the Amtrak-Greyhound Depot revealed that there was only the one bus a day from New Orleans to New Iberia but there were two from New Iberia to New Orleans! (Does this mean that there is a huge depot in New Orleans filling up with all these extra buses I wonder?) The fare was reasonable at $56, around £30, and the timing was good, depart at 12.45pm so no need to rush.

Travel by Greyhound is almost confined to those of limited means and a few tourists and is always “colourful”. We enjoyed the varying scenery and the visits to several small towns along the way and taking in our stride the pleas for a cash top-up etc. we completed the four-hour journey on time.

The room is normally open only until noon, when the curator is available, but on hearing that we had arrived “From England, all that way!” we were conducted to the Bunk collection. Having agreed to meet the curator the following morning we enquired about a place to stay for the night and we were directed to a fine building right across the street owned by Mr and Mrs Norton. Again the cost of bed and breakfas 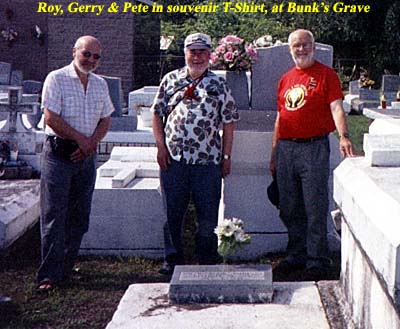 t was reasonable being $100 for the three of us.

After a pleasant evening with an interesting meal a trip “uptown” where we found three bars open, we were later assured that there were six bars in New Iberia, we retired to bed only to be disturbed from time to time by the hooting of freight trains which might not have gone “through the middle of the house” but were not far away, sounding their horn at every road crossing.

Breakfast was fine and we were persuaded to try Mrs Norton’s grits, which proved to be most enjoyable as they were not so bland as those usually served up.

At breakfast we were told that the nephew of the family would be able to drive us around the area following our visit to the library enabling us to visit Avery Island and the Tabasco Sauce works.

For those who are familiar with the splendid Book “Song of the Wanderer” by Mike Hazeldine and Barry Martyn the photographic content of the museum holds few surprises but the collection of information in books and magazines on the shelves is formidable for those wishing to research. There is of course a wonderful collection of recordings and an opportunity to see the silent films of Bunk’s band in New York in the late 40’s. The library offers a modest number of souvenir items such as post cards and T-shirts

Leaving the library we were driven by Michael, the nephew, to the graveyard where a friendly gardener showed us directly to Bunk’s grave. 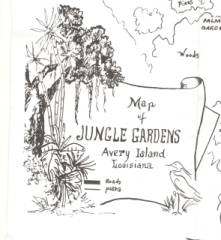 The trip out to Avery Island is a short distance by car, essential transport for the Jungle Gardens. These consist of 200 acres devoted to wildlife with some 20,000 Snowy Egrets and other water birds nesting each spring in the specially constructed area known as “Bird City”. There are alligators; thankfully the ones we encountered were small. 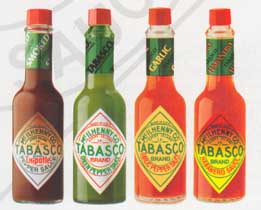 we discovered how the product is prepared and all received a very small bottle to take away.

We returned to the bus depot after visiting a local diner and took the 4.40pm return trip to New Orleans, arriving in good time for yet another night exploring the musical scene.

Donna’s still provides a varying music fare, mostly good stuff, especially on Mondays when Bob French leads his own band and acts as host to a great variety of “sitters in” from visitors anxious to have a blow to top line local musicians happy to contribute to the wonderful atmosphere. Evan Christopher usually plays on Thursdays and this is well worth a visit. Evan’s band was one of the bands featured at the Café Brazil on the Jazz awareness “Nickel a Dance”    Sunday afternoon sessions.

High on the list of places to head for was the Palm Court Jazz Café where the best of the older style music is to be heard. 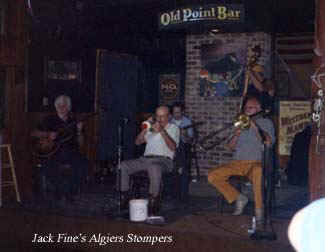 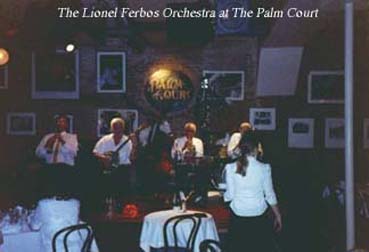 New to us on this trip was Jack Fine’s Algiers Stompers Sunday afternoon session, starts at 5pm, at The Old Point Bar just over in Algiers. Take the free ferry from the bottom of Canal Street and on leaving the landing area go to your left, just a five-minute walk. It might take ten minutes to walk back as the Guinness was only £1.55 a pint. The line up of musicians was unconventional but the music was of the best quality in what must be one of the few rooms we encountered set out for dancing. A lady who wouldn’t believe that I had two left feet coaxed me to the dance floor but I was soon proved right, this she was forced to agree!

We decided to splash out and visited the Inter Continental Hotel on St Charles for a Sunday Brunch. Apart from the food the attraction was the Greg Stafford – Michael White Quartet. They moved around the dining area and “everything was lovely”.

Our good friend the bass player Bernie Attridge volunteered to take us on an excursion and we opted to go over to Algiers to revisit the grave of George Lewis. At the cemetery we met Daniel Farrow tending a family grave and it was good to spend some time with him.

This was followed by a ride out to Westwego to take a look at the Fireman’s Hall, a venue for many recordings.

In the evening Roy and Gerry took a cab out to Vaughne’s Lounge to hear Kermit’s band on their home ground, they play there every Thursday. It was enjoyable but be warned, the band didn’t start until almost 11pm and carried on into the small hours. A taxi is essential but often it is possible to share the cost of a cab for the return journey into the Quarter. I didn’t take this trip as I was suffering from an upset tummy due to me indulging in “strange food”, a deep fried, soft-backed crab that I was assured should be eaten in it’s entirety but on top of a rich creamy sauce and angel-hair pasta I had to say it was too much!

We were privileged to attend the funeral of trumpeter Reginald Koeller where the Society Brass Band played, the last of the reading brass bands. Other musicians augmented the regular band but everyone played in a most disciplined manner “from the dots”. It was not a “Jazz Funeral” but a funeral with music, beautiful music.

In contrast the final journey of Lloyd Washington, the last of the Ink Spots, was an unusual affair. After a moving musical tribute in the church where the final contribution from the Catholic priest, Father Jerome, was a rendition of “When the Swallows Come Back to Capistrano”; we moved off to St Louis No.1 Cemetery where his ashes were placed in the tomb dedicated by the Barbarin Family to New Orleans musicians. In spite of notice in the paper to the contrary there was no band but the “Ernie K. Pall Bearers” accompanied the funeral party claiming to be establishing a new New Orleans tradition!

As they say on the billboard “It Can Only Happen in New Orleans!”

Click here for the Seventh Voyage of Pete and Co!