Ask Tony Sheldon if he is a jazz promoter, and he will tell you "No!".   Some might say he's a comedian, others may not, because he has a sense of humour that sometimes requires deeper thinking.  I do happen to know he's also a song writer, and he's written a book of poems, so some might say he's a poet. He's certainly a man with a lot of strings to his bow.

He says, "The people who organise the jazz events are 'just fans' who like live music, and as the clubs struggle to survive, don't want to lose a venue where they can meet up with their friends".  When he first wrote this article it was all about the club, so I asked him to preface it with a bit more about himself.  Here's his story.............

"At the lockdown completion? on June 21st I shall be reaching the grand young age of 82 and if Britain “opens up”, I shall be putting myself forward as the “New Messiah”!!   I was born at a very early age, my mother looked down in amazement as she was expecting “The Milkman”!  I was told later in life, that she said “He just looks like a ‘little rat’”!!

I became interested in traditional jazz during the Barber, Ball, Bilk, era, and my wife and I were regulars at the Keswick Jazz festival for the first ten years before health problems started creating difficulties.

A memorable concert in the eighties at the Palace Theatre, Manchester when the Preservation Hall Jazz Band came to town and we met after the gig and I returned home with a signed L.P. an amusing incident happened when talking to Narvin Kimball, the piano player, all the band wore P.H.J.B. ties and I asked if there were any spare ties. He told me that they were only issued with one tie for the tour. However, he had taken a liking for my Parker pen when signing the L.P., and having given it to him to take home, he said he would send me the tie when the tour was over, and it duly arrived suitably laundered.

Away from Jazz. I have always been involved with voluntary work. I enjoyed organising and playing Sunday League football, as a goalkeeper of 5’ 7ins, our defence used to say a prayer every time the opposition had a corner, and I have been on the committee in various roles of a Sunday League for 60 years, and have received awards from the Football Association.

As a collector of Cigarette/Trade cards, I have been the chairman of the Cheshire Cartophilic Club for many years. For the last few years, I have taken discussion groups at a Day Centre and I opened and have managed the Salford City F.C. Club shop for ten years. All on a voluntary basis.

It was the nineties when I found “Jazz On A Sunday” and the rest is history!

Rochdale's Jazz On A Sunday (J. O. A. S) first saw "light of Day" in the 1970's when the late Terry Eastwood arranged gigs in the Newhey area, and he continued to promote the visits of live Traditional Jazz Bands at various venues in Rochdale until the beginning of the new millennium, when a committee chaired by Fred Martin then followed by Ken Stephenson took charge until Ken announced in the late Spring of 2008 that the club would be closing in August due to financial difficulties caused by diminishing attendances.

I had been a regular for some time and had been sending reviews to the Rochdale Observer, and I had also been making regular visits to Castleton Gabriel's Football Club who had just sold their Heywood Road venue to Mayfield Rugby League Club. Their Committee asked me if Jazz On A Sunday could take residence at their well-appointed club house, as it had previously been there whilst in the ownership of the Castleton Gabriel's Club. It proved to be excellent timing because along with some long-standing Jazz regulars, it was agreed that the previously arranged gig on 8th September 2008 with Dave Donohoe Band would start the ball rolling, and if successful continue the travels of J. O. A. S.  This was a calculated risk because if the fans stayed away, we would have had difficulty in meeting the contract fee, and the end would be in sight.

We were delighted when an anonymous donor offered to sponsor the evening taking away the initial apprehension, and eighty "jazzers" came through the door, which ensured that we could carry on, albeit with limited fees, although we insisted on honouring the contracts agreed with the previous organiser.  A new committee was chosen and I was asked to take the chairmanship which I still hold today. To clarify, we are not promoters running a business, but jazz enthusiasts trying to provide the best Traditional Jazz entertainment for the people of Rochdale and surrounding areas. We took over "stone cold" but knew quite a lot of bands and received great support from the bands who would rather play for a smaller fee, than cause the club to fold. We shall always be grateful.

The audience came rolling back, some days better than others, but we managed generally to stay on an even keel. Whilst finance was always key, it was rare when a band declined to visit, and over the years we have brought the best bands in the business to Rochdale. Our popular Sunday evening gigs have produced every nuance of the Traditional Jazz genre to cater for the different tastes of the audiences.   Attendances have fluctuated due to many reasons including weather, family commitments, holidays, illness etc., which does become a major factor in an audience of mature years. Cancellations have been few, all due to the weather, when it would have been dangerous to travel for both band and audience.  One Christmas gig comes to mind when at 6.30 I received a call that the band was marooned by snow at Macclesfield (8.00 pm. Start). I asked one of the Committee who lived nearby to go to the club for those who couldn't be contacted whilst I endeavoured to telephone from home as many who could be reached. We had arranged a substantial buffet, and twenty regulars who had braved the weather, were able to tuck in to their heart's content. We have engaged bands from U. S. A., Sweden, Denmark, Belgium, Holland and all over the U. K, all to great acclaim. To the J. O. A. S. Committee it is a labour of love, as we endeavour to bring the very best to Rochdale.

Due to Covid 19, our last gig was on March 15th 2020 at the Newtown National Club which has been our permanent venue for five years. We do not know when we may return. Social distancing is certainly a problem. As the audience and many of the band members are of a similar age and will have been sat in the comfort of their homes on a Sunday evening will they be "champing at the bit" to be first at the door, or will the thought of a cold, wet, dark evening make them think twice? There are so many unknown factors to take into consideration, such as availability, attendances and if at a low level, could we afford to pay the bands the fees required. My Crystal Ball is quite fogged over, so the answers will have to wait. Neither optimism or pessimism is the answer, only realism at the appropriate time will bring an answer to what we hope, will be a return to the convivial J. O. A. S. evenings we all enjoy".  -

Some of the past events at J. O. A. S. click on each one for larger version 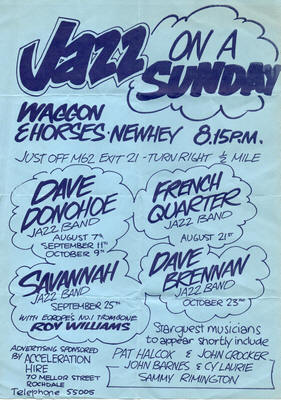 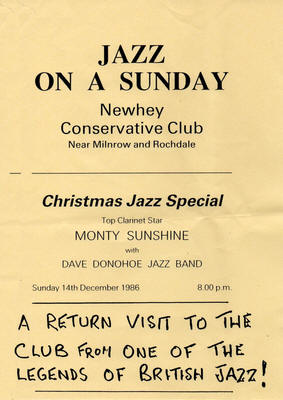 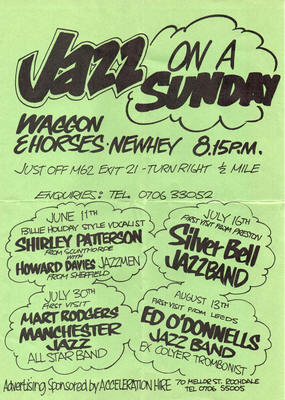 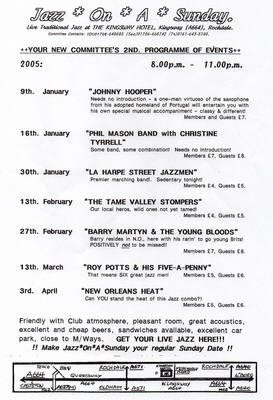 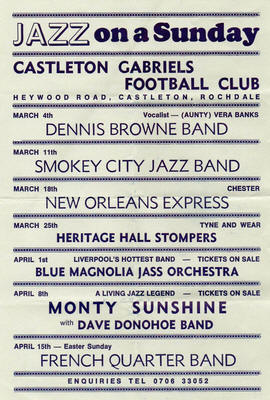 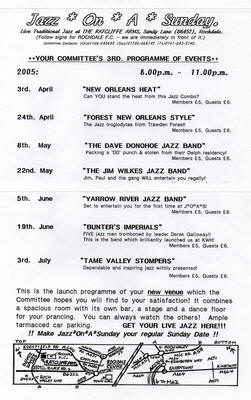 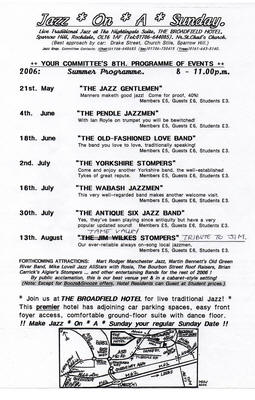 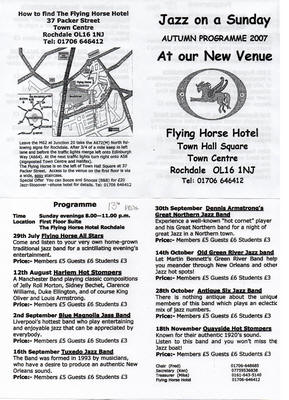 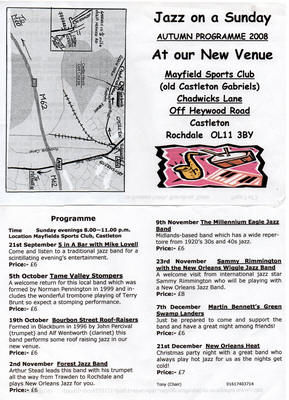 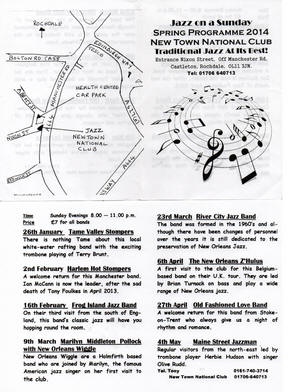